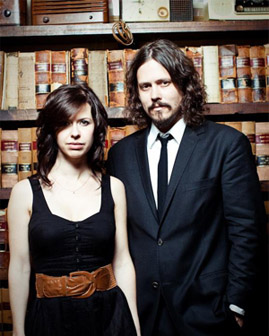 The Civil Wars is an American duo, composed of singer-songwriters Joy Williams and John Paul White. The two met during a Nashville, Tennessee songwriting session in 2008. After releasing a live performance album and a four song EP, their full-length album, Barton Hollow, was released in 2011. The band won the Grammy Award for Best Country Duo/Group Performance and Best Folk Album in 2012.

Williams and White met in 2008 during a song writing session or “writing camp” at a music studio in Nashville, Tennessee. In an exclusive interview, Williams stated that the band name was generated, “As I was driving around town looking at all the Civil War monuments I thought about all the wars that we each face. So the name came about that way.” According to their web site, the group’s name, The Civil Wars, and their song “Poison and Wine,” sum up their thematic direction. They are about the good, the bad, and the ugly of relationships.

The duo recorded their performance at Eddie’s Attic in Decatur, Georgia on April 8, 2009 and created an EP Live at Eddie’s Attic, which had been requested over 500,000 times as a free internet download. In November, the duo released a digital extended play album, produced by Charlie Peacock, called Poison & Wine and the title song was featured on the TV show, Grey’s Anatomy. In December 2010, the duo was featured in Paste’s “Best of What’s Next” column.

The duo performed on The Tonight Show with Jay Leno, at the Sundance Film Festival and ASCAP’s Music Cafe. The Civil Wars appeared on NPR’s All Things Considered and were featured in the Los Angeles Times. They appeared on A Prairie Home Companion and their “Barton Hollow” video was played on VH1.[17][18] They were nominated for a CMT Award in the Duo Video of the Year category and appeared on the cover of Pollstar magazine. The Civil Wars appeared a second time on The Tonight Show with Jay Leno in May, were the opening act for singer Adele’s North American tour,[22] were nominated for the Americana Music Awards in the Duo/Group of the Year and Emerging Artist of the Year categories,[23] and performed a benefit concert for victims of the 2011 Alabama tornado. In June, they were listed as The Guardian’s ‘New Band of the Day.

In the summer of 2011 the duo performed on the Los Angeles radio station KCRW, opened several shows for Emmylou Harris, and performed at Rhode Island’s Newport Folk Festival. In September they rejoined Adele’s UK tour and were nominated for a Country Music Association Award in the Vocal Duo of the Year category. They performed on the UK television show Later… Live in October and subsequently their Barton Hollow album debuted at No. 22 on the UK Download Chart and No. 54 on the UK Albums Chart the following week.

In October they were reviewed in The New York Times, appeared on the Late Show with David Letterman and were featured in Interview. They received the Vanguard Award at the 49th Annual ASCAP Country Music Awards in November. The duo appeared on the cover of the November issue of Nashville Scene and were a topic of conversation on the radio talk show Sound Opinions. The Civil Wars released the Holiday single “Tracks in the Snow” on 10″ white vinyl and the digital version’s B-side “O Come O Come Emmanuel”, was iTunes’s Holiday Single of the Week.

The duo performed at the Ryman Auditorium in January 2012[62][63][64] and received a Grammy Award for Best Country Duo/Group Performance and Best Folk Album[65] and were listed at number 15 in Entertainment Weekly’s The 30 Greatest Artists Right Now issue. The week following their performance on the Grammys, the band’s album Barton Hollow sold over 35,000 copies and peaked on the Billboard 200 at Number 10. They were featured on the cover of Billboard, and their song “Poison and Wine” was featured on an episode of The Vampire Diaries.

In early 2012, the duo performed at Lawrence High School in Lawrence, Kansas as a part of the ‘Classroom Sessions’ and partnered with T-Bone Burnett to provide the film score for the documentary A Place At The Table (previously known as Finding North). The film premiered at the Sundance Film Festival in Park City, Utah, where the duo also performed. In September, The Civil Wars were nominated for two Country Music Association Awards including Vocal Duo of the Year and Musical Event of the Year for their collaboration with Taylor Swift on the song “Safe & Sound”. They won the award for Duo/Group of the Year at the 2012 Americana Music Association Honors & Awards ceremony, and their album, Barton Hollow, received RIAA Gold certification for 500,000 copies sold.

In October, The Civil Wars’ 2009 song “If I Didn’t Know Better” was featured on the series premiere of ABC’s new show Nashville. They also performed on the AMD stage of the 11th annual Austin City Limits Music Festival. In November 2012, the duo went on hiatus citing “internal discord and irreconcilable differences of ambition.

In June 2013, they released the song “The One That Got Away” from their upcoming The Civil Wars. On July 30th, The Guardian made available an exclusive stream of their eponymous new album